The first trailer gives it a very pop-cornish, high budget look, similar to what it was for Raajneeti. Saif Ali Khan looks slightly awkward and heavy duty dialogues dont fit in with him, Amitabh Bachchan looks comfortable in a familiar kind of role for him and Manoj Bajpai looks good. Overall the trailer looks lukewarm but the subject it deals with is quite powerful and perhaps the film will do justice to it.

This week’s latest Bollywood release is Dum Maaro Dum. The movie is a big film releasing after a long while and was eagerly looked forward to with its chartbusting song, cutting-edge promos and a drug-mafia story set in exotic Goa locales starring Abhishek Bachchan in a tough cop role out to clean the drug infested, mafia driven underworld of Goa.The film also stars Rana Daggubatti, Bipasha Basu, Pratiek and Aditya Pancholi amongst many others.

The film is set in Goa and here Goa is shown in a very different light from what we are used to seeing. Director Rohan Sippy has shown a realistic view of Goa unlike the fictitious view we get in past films. Goa shown here is neither the sweet romantic Goa of ‘Kabhi Haan Kabhi Naa’ or the south bombayish view of Goa as in ‘Dil Chahta Hai’. Goa’s underbelly is exposed, its drug trade, local life and sun-kissed atmosphere is thoroughly captured. Beach, beautiful women, booze and drugs they form the identity of Goa.

The first half of the film is real breezy and sets up back-stories of various characters very nicely. The movie moves at a feverish pace and sets up the meeting of all its leads at the Goa airport, almost reminder of ‘Yuvaa’ in which 3 stories collide on a Kolkata bridge. The movie also tends to remind one of gritty cop drama ‘Sarfarosh’ to an extent. The thriller is very well written by Sridhar Raghavan, at least the first half,  however in the 2nd half of the film the writing goes a bit haywire.

The movie is about Police trying to clean up Goa from the clutches of  local and international Mafias acting in various parts of Goa, ruling their various fiefdoms with the power of drug money. Abhishek Bachchan with ‘nothing to lose’ cop is the fearless cop out to topple mafia lord Aditya Pancholi’s world. Prateik is the teenager with dreams and hope and love but caught in the mafia trap, he represents what Goa was before the drug money came in, soft, hopeful, dreamy, lazy and romantic. Rana Daggubatti who has lost his past girlfriend Bipasha Basu to the greed and lure of drug money is initially a mute spectator to the sorry tale the youth gone haywire. He later gets into the act along with ACP Kamath in the hunt for the master drug-pin Micheal Barbossa. Rana represents the Goa of today which has seen it all and continues to be see the same story unfold yet again and again. The second half of the film slightly disappoints as the suspense when revealed isn’t a big shocker but almost expected and almost all the twists can easily be predicted by the viewer. The film could have been much better if the second half was handled in a better way.

Abhishek Bachchan as Inspector Vishnu Kamath lives up to his role and how much ever his critics hate him, one has to agree that slightly crooked and touch cop acts suits him very well. Abhishek is a star who everybody loves to hate and dislike partly for no fault of his, partly due to the expectations people had in him and also partly due to his lazy selection of roles. But he lives upto the role here although he needed a much better conclusion to his role in the end. Slightly disappointing to see him not in focus at the end. Telugu star Rana Daggubatti as the local Goan singer Joki has a nice presence and easy on the eye to look but has similar expressions throughout. He does have a nice role too and by the end he becomes the central figure to the story.  Bipasha Basu as the girl gone the wrong path is okay and is almost a predictable act. Aditya Pancholi is nice as the Mafia boss Biscuta and he is seen on screen after a while. Prateik as the teenage is okay and his love story with Anaita Nair looks cute, but he quickly needs to re-invent himself or else he’ll be doing this same kind of roles all the time. Also he needs to do something about his squeaky voice !! Deepika Padukone in the much hyped and publicized ‘Dum Maaro Dum’ remix song looks drugged out, which of course suits the look of the song. Govind Namdeo and Muzzamil as cops are wonderful.

Technically the film is  excellent and is very well shot and edited. The entire look of the film is superb and suits the mood and story of the film. The background score is catchy and the songs are nice. The film is smartly shot and some of the scenes are indeed dark but overall Goa is shown in a different light altogether. The concept and core idea is nice but script and screenplay goes wrong in the later portion and the ending doesn’t satisfy you completely with several loose ends. It could have been a huge bonfire in the making but leaves us only with lots of smoke.

Dum Maaro Dum is certainly a one time watch.

Here’s the much awaited song ‘ Dum Maarao Dum’ from the upcoming film titled the same. The song is actually called ‘Mit Jaaye Ghum’ and features Deepika Padukone and is set to a remixed version of the original classic tune. The song was released during the India – South Africa game in the ongoing World Cup Cricket at Nagpur

The song set in a smoke filled bar, looks okeyish and Deepika looks hot enough to be called ‘item girl’ now. Hopefully it will do what it is meant to and draw the audience in the movie hall.

Here’s the first look and theatrical trailer from Ashutosh Gowariker’s next movie ‘ Khelein Hum Jee Jan Sey’ starring Abhishek Bachchan as revolutionary Surya Sen and Deepika Padukone as Kalpana Datta. Sikander Kher also stars. The movie is based on Manini Chatterjee’s book ‘Do or Die’ based on Chittagong Conspiracy of the 1930s.

The movie looks sharp and seems to be well made and detailed like most of Ashutosh Gowariker’s films. Abhishek looks like he can pull off the role of Surya Sen, he’s got the intensity and the fire in the eye.The movie has the look somewhat similar to ‘Lagaan’.  Finally a movie which wont be totally brainless. The movie releases on December 3, 2010.

Which of these year end Bollywood movies would be successful at the Box Office? 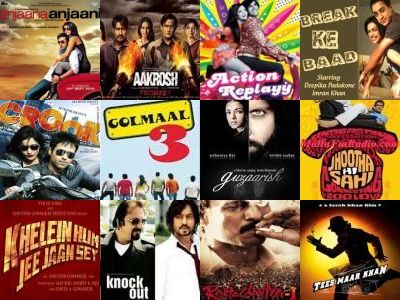 First of the block is Anjaana Anjaani – Starring Ranbir Kapoor and Priyanka Chopra crisscrossing across American Highways, directed by Siddharth Anand. The films release was pushed back by a week ancipating the ‘Babri’ trial verdict, but now even the verdict has been postponed. Lets see if the film is able to weather this storm and also Rajnikanth’s mega blockbuster Robot (dubbed in Hindi from Tamil original Endhiran) also starring Aishwarya Rai, releases on the same day.

Then there is Aakrosh starring Ajay Devgn and Akshaye Khanna about the ‘honour killing’ issue directed by Priyadarshan. This movie has been postponed till 15th October and is currently battling the Censor Board about the sensitive issue it is tackling. Jhootha Hi Sahi starring John Abraham directed by Abbas Tyrewala releases the same day as well. In between Emraan Hashmi’s Crook about racism problems with Indian students in Australia and Knock Out starring Sanjay Dutt, Irrfan and Kangana Ranaut which seems like inspired from Hollywood movie ‘ Phone Booth’. Then there is Raktha Charitra – I by Ramgopal Verma starring Shatrughan Sinha, Vivek Oberoi and Surya about the noted gangster Paritala Ravi.

Apart from these big films there are many small films, medium films, art-house films all set to unfurl on the Box office during this end of the year period. Let us see which one amongst them are successful.

we are in
Indiae.in
india's directory